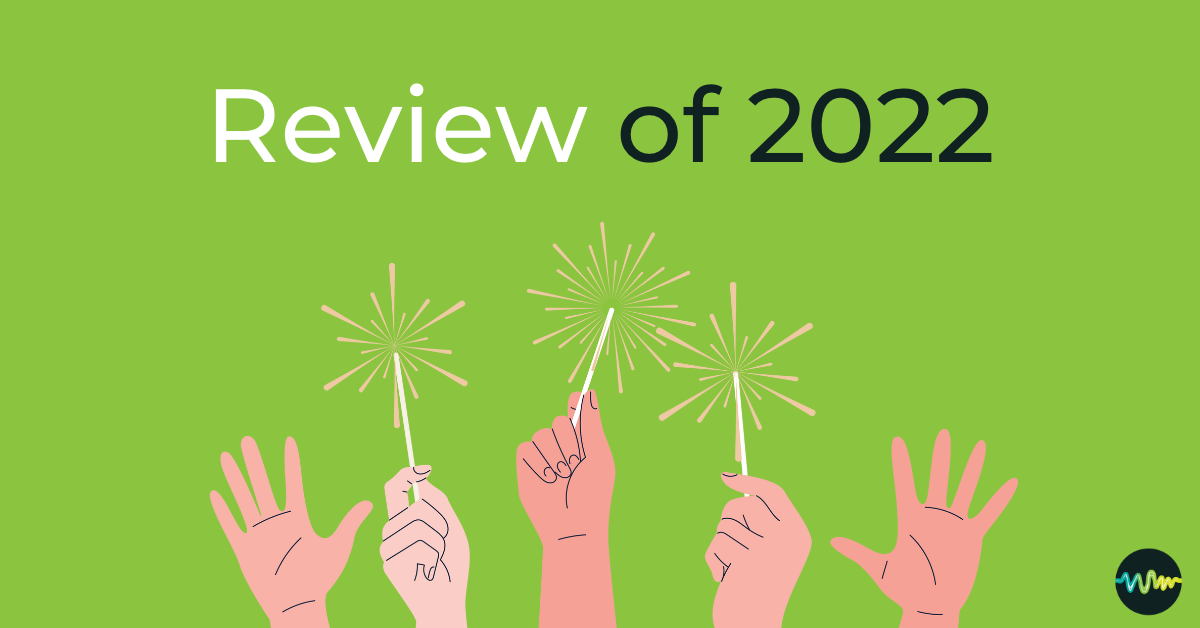 2022 was a really good year for myself and Vibrant Sound Media. Here are some of my highlights.

At the start of the year I was invited into my local college to talk to the students there about my career.

I did it twice and really enjoyed offering my perspective on working within the audio industry to the next generation.

2022 was the year I started working with Louise Shanahan, becoming the editor of 15 Minute Freelancer.

Working with Louise has been a lot of fun.

Together we’ve improved the sound quality of the recordings – I asked Louise to prop up some cushions around her microphone when she was recording – and tightened up the content to deliver quality information while keeping true to the podcast’s name of 15 Minute Freelancer.

For the start of the 2022/23 football season I became part of the Squad Goals team for BBC England.

If you don’t know, Squad Goals is a radio show, broadcast during football matches on the BBC Sport website and BBC Sounds. The show is a bit like Final Score but from the perspective of a fan.

It’s a lot of fun to do and has allowed me to fulfil a childhood dream of working on BBC radio.

I’ll be continuing to contribute to the show throughout 2023.

It’s All Cobblers To Me

My own podcast went from strength to strength in 2022.

We released our 200th episode in October and created a new show dedicated to the NTFC Women’s team in September.

In April I was invited to join other football club content creators to record a series of shows by the Professional Footballers Association, in the run up to the Player of the Year awards. I spent a day chatting to Karen Carney, Emile Heskey and a great bunch of creators.

Northampton Town FC invited me to host 2 events for them in 2022. First up was the 1997 Wembley Reunion dinner in May where the club celebrated the 25th Anniversary of the 1997 Play-Off Final win. We were joined by several members of the squad from that year and I interviewed them in front of a packed room of Cobblers fans. The second was a Fans Forum with the Chairman, CEO and Supporters’ Representative to the Board.

The podcast received 2 award nominations this year. Club Podcast of the Year at the Football Supporters’ Association Awards and Best (Football League) Podcast at the Football Content Awards.

We didn’t win either this time around, but it was great to attend both award ceremonies and meet so many great people from football and sport podcasting.

In 2021 I met Amy Gumbrell, a freelance WordPress Developer and budding podcaster. We became friends and now meet once a month to chat about how our respective businesses are going.

Amy helped me to create this website and in return I helped her to create her podcast, Help! My Website Sucks.

It’s a cracking podcast, aiming to answer all those frequently asked questions about websites Amy’s clients have when they first meet her.

We released season 1 in February and season 2 is currently in production, ready for release at some point in 2023.

It isn’t just small businesses I’ve had the pleasure of working with in 2022. Back in May I produced and presented a short series of podcasts for One Identity and Microsoft, called Better Together.

The aim of the podcast was to showcase how using One Identity’s cyber security products alongside Microsoft 365 meant organisations were better protected against outside threats.

The feedback I received from Microsoft’s representative on the show was wonderful and I hope to work with both companies again in the near future.

One of my biggest clients launched their podcast series in 2022.

Stoma and Continence Conversations by Coloplast Professional is for nurses who work with patients who need specialised stoma or continence care.

I was approached by Karen after her husband introduced her to It’s All Cobblers To Me and suggested that I could help her make a podcast.

In 2022 I produced 3 series of the podcast and we’ve recently signed a new deal to produce a further 3 series this year.

It was great to be able to attend 2 major events in the UK podcasting calendar this year.

The Podcast Show took place in May and was a fantastic 2 days of meeting others in the industry and learning about what the future holds for podcasting.

At the British Podcast Awards I was thrilled to see many of my friends take home awards for their podcasts. I had a great time with my friends and can’t wait for this year’s event. I’m going to be pushing a lot of people to enter their shows into the awards so you’ve been warned!

Thanks to everyone who helped make 2022 a really successful and fun year. And here’s to more in 2023!