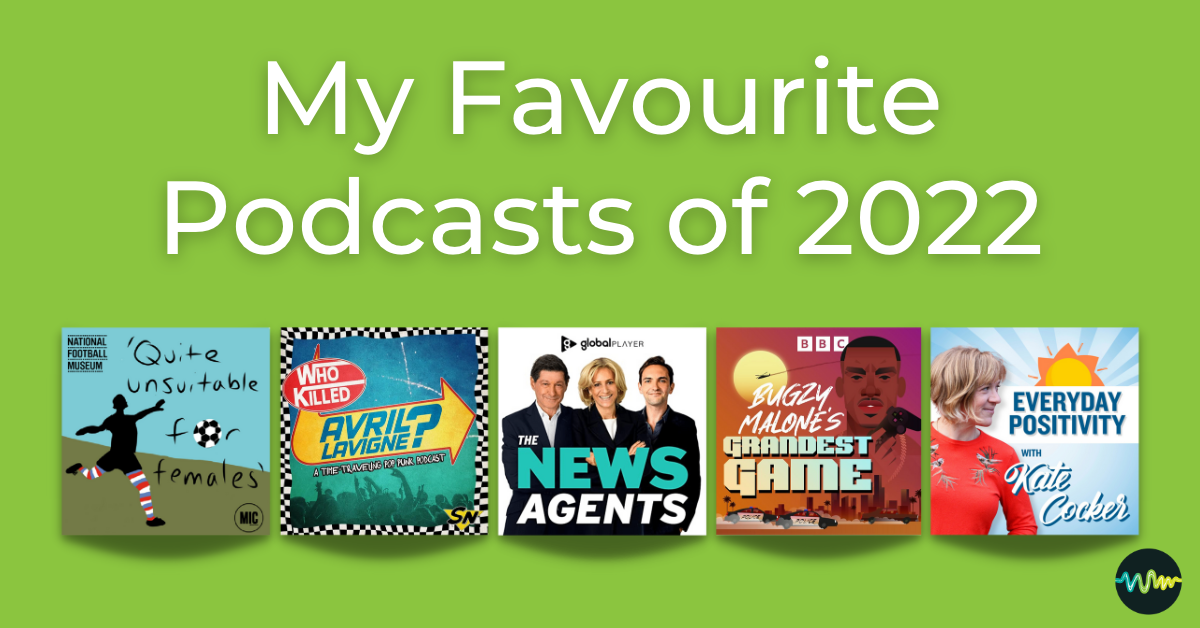 I’ve been listening to podcasts for a long time and while I have a staple few that have been on my playlist for many years, I love finding new ones.

In 2022 I went through my subscribed list and unfollowed any I’d not listened to for a while. It gave me space to add new shows without feeling like I’d got too many to listen to already. It was a really good, cleansing experience and I suggest you do that too before adding any new podcasts to your library.

There were several new podcasts which I found in the last 12 months and this is a list of my favourites.

Some of them were brand new in 2022 and some were just new to me.

I might be cheating a little bit with this first pick because I know Kate and the team behind Everyday Positivity, but I only started listening to it properly this year.

Everyday Positivity is available as both a podcast and a flash briefing. It’s a daily dose of content designed to get your day off on a positive note.

On some days you’re given a reminder that it’s okay to be the way you are and on others, Kate gives you a simple task that could help you make a small improvement to your life.

As someone who struggles with valuing my own self-worth, getting a little pep-talk every morning is really helpful.

And with Everyday Positivity, you get straight to the good bit. Each episode is less than 3 minutes long, perfect for listening while I get dressed or brush my teeth.

I’ve been a huge fan of Newscast from the BBC for many years. And when Americast began in the lead up to the 2020 US Election, I found myself absorbed by that too. So when Emily Maitlis and Jon Sopel announced that they were leaving the BBC to start a new daily news podcast, I couldn’t wait to listen.

The News Agents launched in August 2022 and has swiftly become one of the UK’s most listened to shows.

Maitlis and Sopel are joined by former BBC Newsnight policy editor, Lewis Goodall to ‘not just tell you what is happening but why’ as well.

Free from their BBC constraints, The News Agents delivers a thorough explanation of the day’s news, drawing on their experience to provide you with an informed opinion in a fresh and honest way.

Despite my love of reading, I’ve not really got into fictional drama podcasts. But that all changed this year with Who Killed Avril Lavigne?

If you’re in your late thirties like me, you’ll remember a time when skateboarding was cool and pop punk ruled.

I was a huge Blink-182 fan in my late teens and early twenties and my musical tastes soon branched out to other artists in the genre, including a small, Canadian pop-punk princess called Avril Lavigne.

In the early 2000’s Lavigne became the subject of a conspiracy theory, with people believing she had died and been replaced with a body double. The conspiracy was an exact replica of one about Paul McCartney decades earlier.

In this 8-part series, we meet Derek, a kid born too late for his musical taste and branded a pop punk loser by his peers.

When Derek meets a mysterious substitute teacher, Dom Telonge, he’s sent back to Warped Tour 2005 to stop the abduction and replacement of the pop punk princess, Avril Lavigne.

The story is a wild but nostalgic one. And the use of new pop punk tracks, written especially for the podcast, Who Killed Avril Lavigne? is a fun, gnarly listen that will transport you back to your youth.

Quite Unsuitable For Females

With the success of the Women’s European Championships and England’s Lionesses in particular, 2022 was undoubtedly the year that women’s football grabbed the attention of the world.

Before the tournament, the National Football Museum released a 5-part series looking at the history of the women’s game, taking its name from a directive in a FA minute book from 1921, in which it is stated that “the game of football is quite unsuitable for females and ought not to be encouraged”.

The series is fantastically made and presented by a group of community producers who use the National Football Museum’s archives to take the listener on a journey through the history of the game.

With great guests, including current Everton and England player, Toni Duggan, Quite Unsuitable For Females is a terrific listen for football fans and history buffs alike.

My final pick came late in the year but is more than worthy of appearing in this list.

It tells the story of Grand Theft Auto, a computer game which transformed gaming, taking it away from children and giving adults the chance to roam fictional cities, committing crimes and making money at every turn.

While I wasn’t allowed to own the game myself, I used to play GTA at my friends house and the story behind the game’s success – and the controversy it caused – is a fascinating listen.

What makes it so compelling though is the way that story is told through the experiences of rap artist, Bugzy Malone.

Malone is no stranger to the criminal underworld depicted in the game and as such, there’s a real hard relate that he brings to the podcast.

If you’re a gamer, whether you’ve played GTA or not, you have to listen to this podcast.