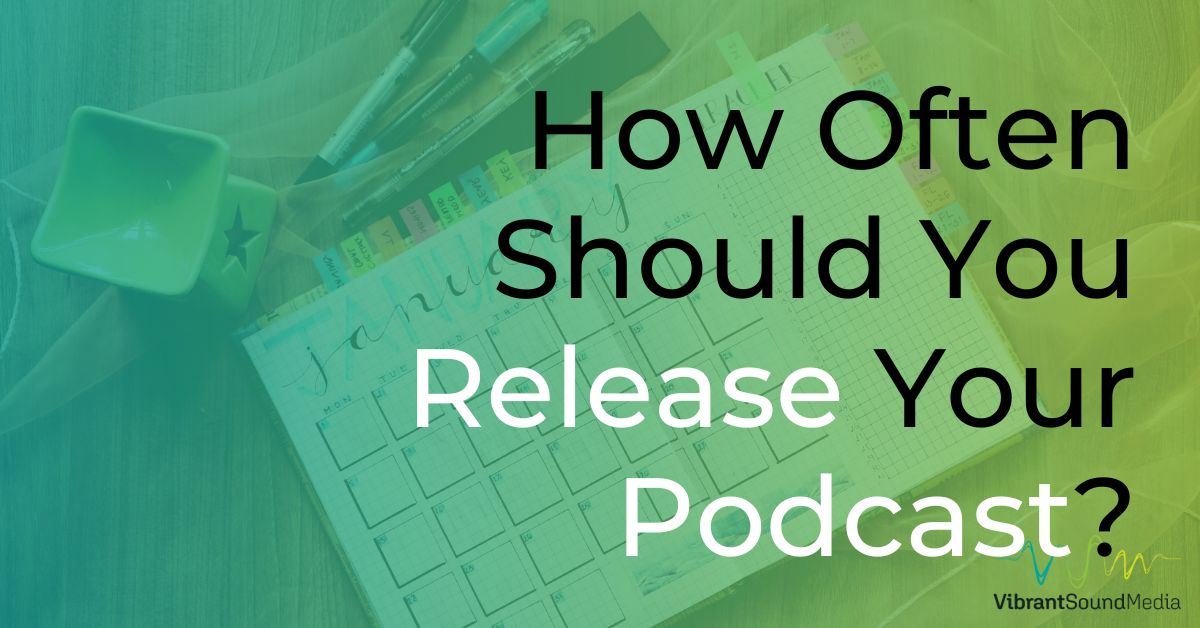 Podcasts come in all shapes and sizes. And I don’t just mean in terms of their content. In my podcast library (I’m an Apple Podcasts guy) I have a huge array of podcasts, all of which update at different times. Some release new episodes every day. Some come out weekly. Others come out all in one go or on a set date, once a month.

Deciding how often you’ll release a new episode is something you should do quite early on. You can change your mind later on down the line, but it’s definitely good to have it nailed down early in the planning process.

How you decide will depend on a few things but for me, the most important one is time.

There seems to be a myth that podcasting is quick and easy to do. Well let me put that to bed right now. It’s not. Just like videos, blogs and newsletters, podcasts take time and a fair bit of work to get right. You shouldn’t take making a podcast lightly. You will spend a lot of time on each episode.

I’m not trying to put you off. Far from it. I want you to make the very best podcast you can. To do that though, you need to put the time in.

Of course, there are ways and means of working which will make the process easier. You could batch record several episodes, for example, giving you a buffer before you release the first one. You can then continue to record episodes while the first few are being released to the public.

One tactic I’m finding more and more people doing is to record and release the podcast in seasons. Generally, ten or so episodes will be recorded, edited and produced at a time. Each episode is then released over a period of time or all at once before the podcast takes a break and comes back for the next season. If this sounds familiar to you, it should do. Television has worked this way for years. Doctor Who, for example, tends to release 12 episodes each year. While I’d love there to be more episodes, having a break in between seasons builds anticipation and allows time for the show to be produced to a high standard.

Making a daily podcast is a huge undertaking. Believe me, I’ve done it. During the delayed European football tournament, Euro 2020, I released a new episode of It’s All Euro 2020 To Me every day. I would watch all the matches and then record a new episode after the last game of the day had finished. It would then be edited and scheduled for release at 1am.

I did this every day for 32 days. By the end of the tournament, I was shattered. I was completely done with football and podcasting. It was a massive job and I underestimated how hard it would be.

You shouldn’t feel pressured into going with a particular release schedule. Your podcast is unique to you. It should fit in with the way you work and the time you have to offer it.

You might want to release your podcast weekly but if you only have time to make one episode a month, you’re going to struggle to stick to that schedule. As time goes on, you’ll start to see the podcast as a hindrance and won’t enjoy making it. If you only have the time to do it once a month, do it once a month. Pick a specific date or a day (eg. the first Tuesday) that you’ll release a new episode on and work around that. Your audience will know when to expect a new episode and will respect you for making something worth listening to.

Of course, you don’t need to do all of it yourself. You can get help from someone to help with all aspects of making your podcast that will free up your time to do the bits you enjoy. If you’d like help with any of it, get in touch at the form below.