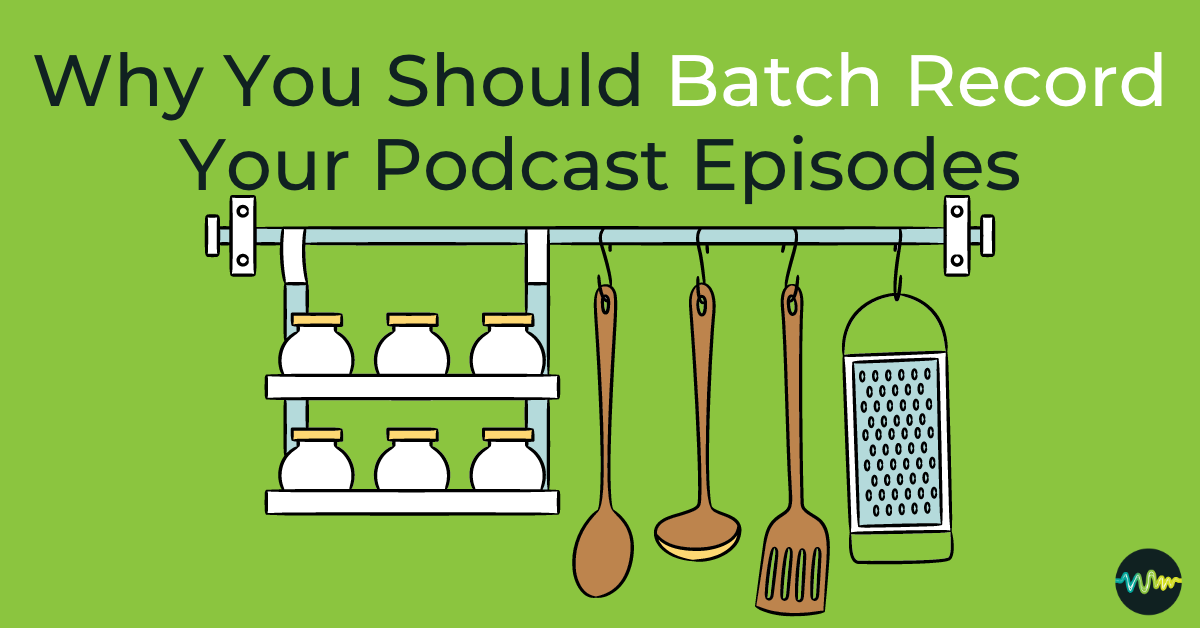 When I start working with a new client, one of the first things that we discuss is the frequency with which they’d like to release the episodes. More often than not, the preferred frequency is once per week and while it is my preferred timescale too, it is a lot of hard work to keep up with.

I’ve written before about how to decide how often you should release episodes. You can read that here.

Here I’m going to explain one way that you can soften the blow of releasing weekly – by batch recording your episodes.

What is batch recording?

Batch recording simply means making several episodes in one go. Think of it like cooking lasagne. You could make just enough for you and the family to eat that day or you could make a bigger one, eat some of it and save the rest for another day. Batch cooking is a great way to save time in the kitchen, So why  not use the same principle with your podcast?

How to batch record episodes.

It’s pretty simple to batch record your podcast episodes. Instead of planning, recording, editing and producing one episode a week, do several at a time.

While it might mean spending more time on your podcast in a single day, it will save you time in the long run. If you can get several episodes recorded in a day, you could get yourself four, five or even six weeks worth of episodes done in advance of their release.

I often work this way with my clients. We’ll plan out an entire series of episodes and then get those recorded over the space of a week or two.

The key to this is the planning. It’s important to spend some time working out what each episode is about, how you’ll approach the subject and who the guests will be, if you’re having any at all.

You’ll also want to create a release schedule for the episodes. What order will they go out in and when do you want them to start going live?

Once you’ve created your schedule you can plan each episode out a little more. Write a script for each episode that includes an outline of the questions you want to ask any guests and a rough outline of what you hope to accomplish in the intro and outro.

Next choose a date for when you’ll record the episodes. Invite any guests and provide them with everything they will need to be able to join you on the recording. Make sure to give yourself enough time to record each episode and take a break between recordings too. These things rarely start on time and sometimes you may have to allow for some technical problem solving. Don’t leave yourself short of time to get a drink or rest your eyes and voice.

It isn’t just the recordings you can do in advance either. Using your scripts, you can write out your show notes. Leave gaps to fill in any detail you won’t know until after you’ve recorded the episodes. You can also create your episode artwork and marketing materials (social media posts, images etc.) in advance too.

Can anyone batch record their podcast?

It depends what your podcast is about and how your schedule works but the short answer is yes.

I’d find it difficult to batch record our regular episodes of It’s All Cobblers To Me because we are reacting to football results and news as they happen. But if I’m making a series of interviews, I’ll get as many recorded and edited in advance as I can.

Remember, it isn’t just the recordings that can be batched. Artwork, show notes and promotional material can all be worked on in advance.